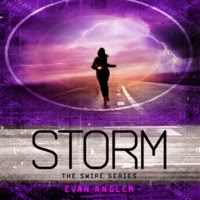 Synopsis: In a future United States under the power of a charismatic leader, everyone gets the Mark at age thirteen. The Mark lets citizen shop, go to school, and even get medical care—without it, you are on your own. Few refuse to get the Mark. Those who do . . . disappear.

Logan Langly went in to get his Mark, but he backed out at the last minute. Ever since, he’s been on the run from government agents and on a quest to find his sister Lily, who disappeared when she went to get her Mark five years earlier. His journey leads him to befriend the Dust, a vast network of Markless individuals who dissent against the iron-grip rule of the government. Along the way to the capital to find Lily, the Dust receive some startling information from the Markless community, opening their eyes to the message of Christianity and warning that humanity is now entering the End of Days.
In Storm, Logan and his friends are the leaders of the Markless revolution. But while some Markless are fighting Chancellor Cylis’ army, the Dust is busy trying to find a cure for a horrible epidemic sweeping through the Marked. And it's difficult for them to know who to trust, especially when they aren't sure if Logan's sister Lily, one of the commanders in Cylis' army, is on their side or not. And all across the nation—and the world—the weather has become less stable and a storm is brewing that bigger than any of them could have ever imagined.
REVIEW: I'd like to thank NetGalley and the publisher for allowing me a copy of this book in exchange for an honest review.
This book was okay, typical post-apocalytic, government versus the people book that has popped up so frequently ever since The Hunger Games became popular. However, it is published by a well-known Christian publisher, Thomas Nelson, so I was surprised when there weren't any obvious religious leanings in this book. There was a scene that involved a Bible, and towards the end, one of the main characters gets involved in a scene very much like the trials of Jesus, but other than that, I saw nothing truly religious about this book. No angels, prophets, or anything I would have expected, so this was an interesting surprise.
One thing I do not agree with is the publisher says this is a book for age range of 8-11. I can't see my eight year old being able to understand this book and she's an advanced reader. I would suggest more along the ages of 11-15, so keep that in mind if you're buying this book for a younger reader.
Overall though, for being the third in a series, it was easy enough to read as a stand-alone. I usually shy away from series books that I haven't read from the beginning. The writing was well-done, it was descriptive, and the characters were well-written.