REVIEW: To Tempt A Viking by Michelle Willingham 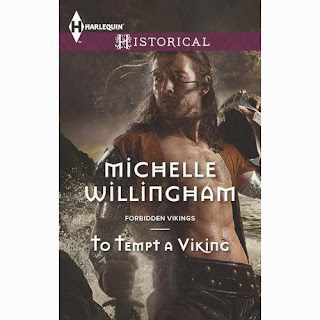 Synopsis: Warrior Viking Ragnar Olafsson stood by as his best friend claimed the woman he desired the most. There was only one way to quench the deep darkness within him—become merciless in battle.
When Elena is taken captive, fearless Ragnar risks everything to save her. Now they are stranded with only each other for company. Suddenly every longing, every look, every touch is forbidden. Elena could tempt a saint—and sinner Ragnar knows he won’t be able to hold out for long!
Review: I received a copy of this book in exchange for an honest review from NetGalley.
The time period this book is set around is, I'm guessing about 800-1000 CE, since the scene is set in and around Ireland. The author doesn't really say, that would have been helpful from the beginning.
The characters are alright. Nothing really to pull your heartstrings over, or make me emotionally invested in them. Ragnar is your typical alpha male, who overcomes all sorts of pain and adversity by becoming even more of an alpha male. Elena is the barren wife of his best friend, emotionally destroyed over not being able to bear children for a man who she really doesn't even love. Styr is the jerk of a husband who gets captured, thus forcing Elena and Ragnar together for the requisite amount of time.
The only thing that kept me reading this book was wanting to see how her marriage to Styr would be dissolved, after all, how else would a happy ending come about? Thankfully this was the one thing that kept me reading because it actually ended up being a situation which emotionally invested me, and I wanted to go into the book and slap all three of the main characters.